On top of that, they have many rules regarding the person's passport photo, from the pose and expression to the choice of clothing, etc.

Governments enforce these rules for security and identification purposes.

If you are planning to travel to a foreign country, you must apply for a visa and passport (whether it is for tourism or business travel).

To obtain a visa or passport, you must go through a lengthy process. You have to comply with government regulations to get these documents.

They also have rules about the passport photo of the person, including the choice of clothing，the pose and expression, etc.

These rules are enforced by governments for security and identification reasons.

Passport photos are important for passport applications and ID card applications. However, the rise of technology means that identity fraud is on the rise.

A University of York study entitled " Why a smiley smile makes it easier to identify" was conducted to increase accuracy and reduce identity frauds.

They found that a smile with a closed mouth for a passport photo can increase accuracy and make it easier to match faces.

According to the studies, at most, passport photos show a "closed mouth smile".

These are only studies, and they won't make a difference unless the government of the country mentions it in its passport photo rules.

These are the results of our analysis of passport photo rules for the most popular countries.

U.S. regulations regarding smiling on a passport photo

The U.S. allows you to smile openly for a passport.

Other things, such as a smile too big or too small, may cause the cancellation of your passport application.

They even used a photo to distinguish between natural and unnatural smiles.

It is safe to say you can smile naturally in passport photos, at least in the U.S.

Regulations of other major countries

Analyzing some major countries such as Australia, Canada, and the U.K., we found results that were different from the U.S.

They are instructing people to keep a neutral expression. The government discourages natural smiles. 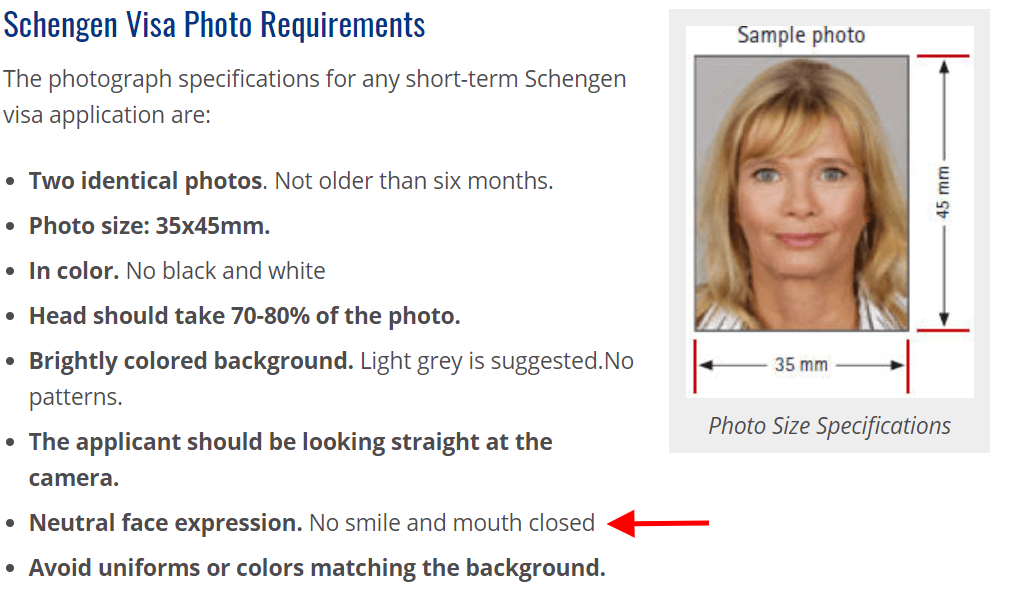 These are screenshots taken from the official websites for the major countries. We encourage you to keep a neutral smile.

We found out that the U.K., Canada, and Australia use a different face recognition algorithm to read your facial. This makes it more difficult to recognize smiles in photos.

Can you smile on a passport photo of yourself?

We have to ask: Are other countries encouraging smiling for passport photos after analyzing each country's photo requirements?

It all depends on where you live and what country you visit. Most countries suggest a neutral facial expression. It is better not to smile when in doubt and to keep a neutral expression.

We have created all country passport, visa, and other ID photo requirements to make it easier.